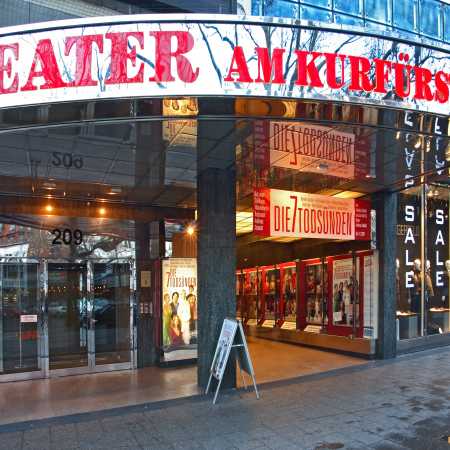 Theater and Komödie am Kurfürstendamm belong to the most famous private theaters in Berlin and are located directly at the Ku’damm in Berlin-Charlottenburg.

The famous director and intendant Max Reinhardt opened the Theater am Kurfürstendamm in 1921 in the former rooms of the Berliner Sezession, where impressionists such as Max Lieberman were working. The designs for the reconstruction were created by the famous theatre architect Oskar Kaufmann.

The program is famous for sophisticated, urban entertainment theater; comedies, boulevard plays, shows, concerts, musicals and lectures, staged classical or modern, serious or funny, are part of the repertoire and always stand out with national or international stars. In the 2017/2018 season, Desirée Nick or the Comedian Harmonists played at Theater am Kurfürstendamm for instance. The comedy seats 607, and the theater seats 807 people.

The houses, which are important parts of Berlin’s theater scene, look back on an inconsistent history but have consistently been under the direction of the Woelffer family since 1950.

By the end of May 2018, the last production will take place at the traditional venue as the building will be torn down during a re-design of the quarter and a new stage will be built. During the construction period, the ensemble will temporarily move into the Schiller Theater.