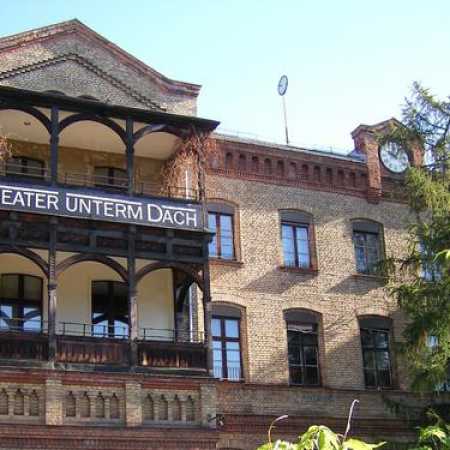 Theater unterm Dach at the district Prenzlauer Berg is the municipal stage of the borough of Berlin Pankow and is part of the culture center „Kulturhaus im Ernst-Thälmann-Park“, which is situated on the former site of the „IV. Städtische Gasanstalt“, the old city gas works. Besides the theatre the venue Wabe and the gallery Parterre are also part of the culture center, amongst others.

Theater unterm Dach is a production and performance venue for freely produced theater projects and doesn’t host an own ensemble. The aim of the theater is to encourage young artists and to offer a various cultural program in the field of spoken theater. There are premieres and first releases taking place as well as adaptions of classics, that are created in coproduction of different groups at the venue.

The theatre hall, which is situated in the top floors of a building with a prominent balcony, holds up to 80 people. A couple of actors’ or directors’ careers have started there: Corinna Harfouch was playing at Theater unterm Dach and there have been stagings by Jo Fabian, Astrid Griesbach, Anja Gronau and Jan Jochymski.