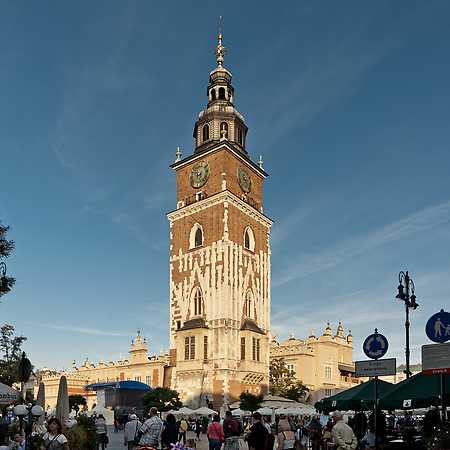 Krakow Town Hall Tower is the only remnant of a gothic Town Hall, demolished in 1820. It currently houses a branch of the Krakow Museum, which opens it to the public.

The entrance to the tower is guarded by a pair of lions, dating back to the beginning of the 19th century and coming from the classicist Morstin palace in Pławowice. A Gothic portal with the coat of arms of Krakow and the emblem of Poland has been preserved at the entrance. On the ground floor, in a room that was once used to store the rich treasury and insignia of the councillors' power, there is a set of 14 house marks from 1444, which is a European rarity. A narrow and steep staircase with 110 stone steps leads to the upper rooms of the tower. The hall on the 1st floor is one of the most beautiful Gothic interiors in Krakow The recent restoration restored its cross-ribbed vault and revealed remnants of polychrome and gilding. Reproductions of views of the former Krakow Town Hall can be seen here.

The hall on the 2nd floor has a wooden coffered vault and is lit by three pointed windows. Stone architectural elements found during the renovation of the tower were built into the brick walls. Reconstructions of medieval burgher costumes are on display in the room. A room on the 3rd floor contains archival photographs by, among others, Ignacy Krieger. On the top, 4th floor, the attraction is an old clock mechanism funded in 1967 by the Cracow Chamber of Crafts.

The cellars of the Tower have housed the Teatr Ludowy Scena pod Ratuszem (Stage Under the Town Hall) since 1998.