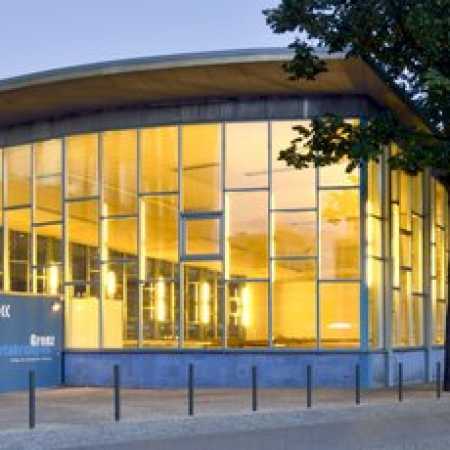 Tränenpalast is the former departure hall of the border crossing point Bahnhof Friedrichstraße between GDR and FRG and is situated in the former Eastern half of Berlin at the district Mitte.

The building, that was raised in 1962, got the name Tränenpalast (German: palace of tears) because most GDR citizens didn’t have travel freedom to Western Berlin and sorely had to say goodbye to their visitors here.

Today, a permanent exhibition that was opened in 2011 by the foundation Haus der Geschichte of the Federal Republic of Germany informs about the consequences of partition and borders for the daily life of the Germans with more than 550 objects, films and documents as well as reports by contemporaries and educational offers for every target group. The program is completed through panel discussions, book presentations and workshops to create a platform for the exchange with contemporary witnesses as well as prominent representatives from politics, economy, culture and media. Besides, Tränenpalast is a place of memory and visitors from all over the world can learn about borders, control, democracy and dictatorship.