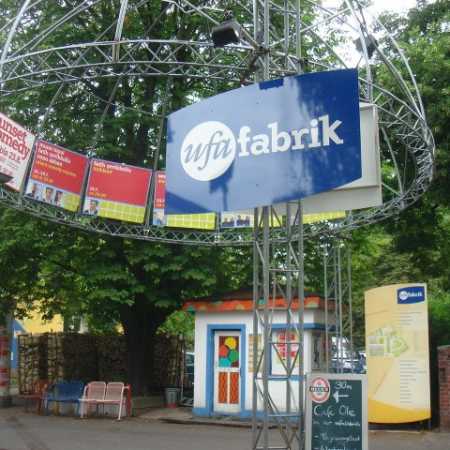 UFA Fabrik is a self-organized culture and living project, situated on the site of the former film studios of the company Universum Film in the district Tempelhof.

The international culture center and the community were founded in 1979 after a peaceful squat at the site, that spreads over around 18.500 square meters. Nowadays, approximately 120 people are working at UFA, around 45 of them members of the community that are also living there.

The premises, where famous movies like „Metropolis“ or „The Cabinet of Dr. Caligari“ have been produced once, are today home to a communication center with focus on culture, ecology and social coexistence. It hosts various different institutions: Two theater halls, two cinema auditoriums, an open air stage, a kids’ circus school, a café, a school, a farm for children and more. The cultural program is a mixture of theater, varieté, dance, music, cabaret, lectures and workshops for all ages. Almost daily, different artists are performing on one of the stages.

UFA Fabrik aims to support cultural exchange and therefore works with numerous partners from all over the world. Young artists and youths find support to get creative and start an international career. In the time when no plays are taking place, the stages can be used as rehearsal space, workshops and ateliers.

Sustainability is another important point at UFA: It is powered by own solar panels and power stations and the roofs are grassed. 2004, the UN honored the center as the „Best Practice to Improve the Living Environment“. Therefore, ecology is also an important point in the program: There are guided tours, seminars, workshops, discussions and creative events around the topic of sustainable living.

Every year, in the beginning of September, UFA Fabrik organizes the street art and environment festival „ufaFabrik Boulevard“ of the site. Besides, the „Jazz Meeting Berlin“ is taking place there yearly.