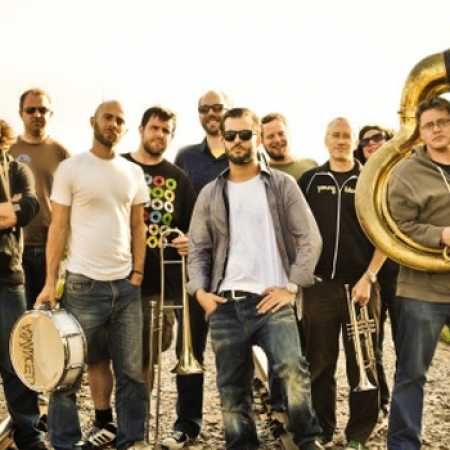 The Youngblood Brass Band is a brass band from Oregon, Wisconsin, United States that was started by students at Oregon High School in 1995 when they were known as the One Lard Biskit Brass Band with the name changed to the current name in 1998. The Youngblood Brass Band combines the inspiration they took from the traditional New Orleans brass band sound with influences from jazz music, improvised music, a decidedly punk ethos, and a strong hip hop component. More than many New Orleans groups, the Youngblood Brass Band focuses on tight ensemble playing and pushing the boundaries of brass band music beyond its traditional genre, which allows them, even when performing live, to provide solid, diverse backing for Skogen’s rapping and McIntosh’s virtuosic sousaphone work. Unable to be classified as either jazz, hip-hop, punk or any other existing genre, the band coined the term Riot Jazz. The band acknowledges the debt their music owes to the New Orleans bands, however, with performances of traditional tunes such as Chinatown, My Chinatown, which they included on their Unlearn album.