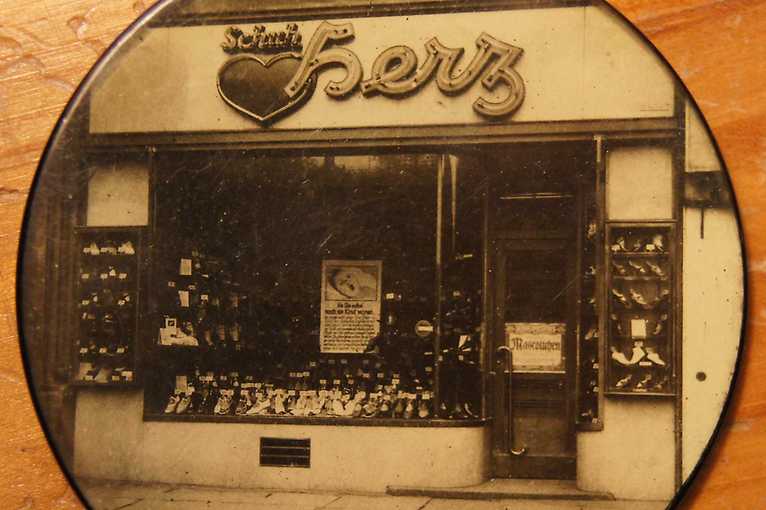 Before the war, Olga, Hilde, Walter and Steffi Herz lived in a tenement house at 4 Solny Square. The family had been connected to this building since 1894, when Ludwig Herz opened a famous shoe store on the first floor. Now, after more than 120 years, OP ENHEIM – a private cultural institution which has become a depository of the memory of the inhabitants of this place – has its seat in their former house. It was the history of this family that inspired the naming of the room on the 5th floor of the building as the Herz Salon, and it is here that the four Stolpersteine, or “stones of memory,” will be presented, soon to be set into the floor in front of OP ENHEIM.

On the night of November 9/10, 1938, a dramatic event took place – Kristallnacht. In the following years the Herz family and other Jewish residents of the tenement house experienced further repressions – they were deported, murdered or forced to emigrate. On the 83rd anniversary of the pogrom, methods of commemorating Holocaust victims will be presented, including, above all, Gunter Deminig’s Stolpersteine project, in which the artist inserts small cubes dedicated to particular people into the pavement. During the lecture it will be possible to learn more about alternatives to the Stolpersteine and about the fate of the Herz family. The need for commemoration is most often initiated by relatives of the victims, but it can also come from people who are not related by blood. The activities of OP ENHEIM are an example of such a path, in which the institution and the people who make it up become the depositary of memory. The erection of the Stolpersteine is a long-term process, often requiring archival research into the fate of the victims. The path to the creation of the four memorial stones that will be presented in November began with the discovery of the history of the Oppenheim Tenement House. The book was the fruit of this search. The meeting will be hosted by Aleksandra Janus – PhD in anthropology, deputy chairperson of the Forgotten Foundation, co-author and curator of the Museum Laboratory initiative, director of the Digital Centre and manager of the Culture Opening Workshop, curator of the “Exercising modernity” programme. She is an associate of the Centre for Research on Cultures of Memory at the Jagiellonian University, a lecturer at the School of Ideas SWPS, a member of the board of the publishing series Exhibiting Theory and FestivALTers – a group active within FestivALT. In her academic work she investigates cultures of memory, strategies of commemoration and the role of institutions in the process of institutionalizing discourses about the past. Member of the Museums for Climate group and Culture for Climate collective.