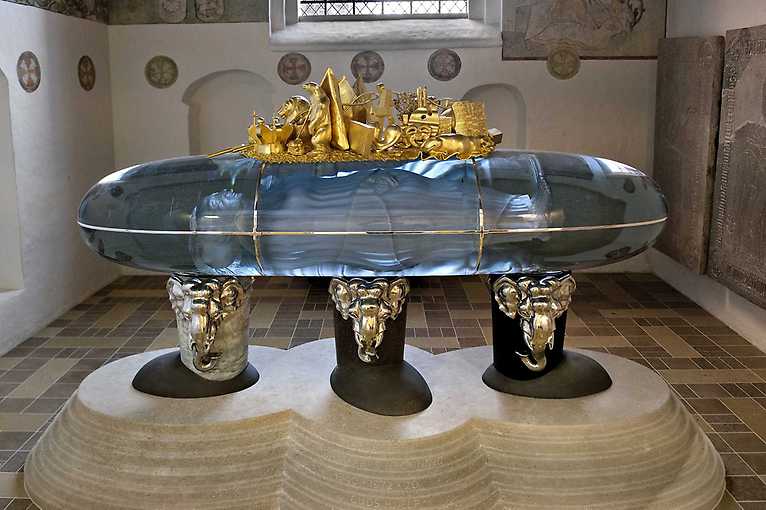 The exhibition shows Zdeněk Lhotský's extraordinary creative range both as an artist and as a specialist in molded glass.

Zdeněk Lhotský is a painter, sculptor, glass artist, student and collaborator of the famous Czech glass artist Stanislav Libenský. At the same time, he is an internationally recognized expert in large-scale projects made of molded glass. The exhibition in the Gallery of the Czech Center presents both sides of Zdeněk Lhotský: the artist and the outstanding technical specialist. The curator is Sylva Petrová, leading expert on glass art in the Czech Republic.

Part of the exhibition is dedicated to a worldwide unique technological masterpiece, the glass coffin for Queen Margrethe II of Denmark. The four-ton coffin was made by Lhotský according to designs by Danish sculptor Bjørn Nørgaard and is now located in the last free side chapel of Roskilde Cathedral, the traditional burial place of the Danish royal family.

From 2012 to 2018, Lhotský and his team were busy making the glass coffin at the renowned workshop in Pelechov near Železný Brod in the Czech Republic, where sculptures made of molded glass and architectural projects by the iconic artist couple Stanislav Libenský and Jaroslava Brychtová have been created since the 1950s. These two are among the most significant “rediscoverers” of molded glass – an ancient glass technique used by Egyptians, Phoenicians and Persians as early as 400 BC, and then forgotten until the 20th century. Sculptures made of molten glass are created sculpturally from sketches and designs to models to the production of a mold, which is filled with glass blocks. The melting and slow cooling of the glass sometimes takes several weeks. Then the mold is mechanically removed and the surface is processed – ground, polished, sandblasted, possibly polished in acid.

The second part of the exhibition shows a selection from the free work of glass artist Zdeněk Lhotský, mainly objects made with the technique for molded glass “Vitrucell” developed by him. Also on display are sculptures made of glass and metal, stone stelae, drawings made of paper and free paintings.

At the exhibition, the publications Pluralita Identity – a cross-section of Zdeněk Lhotský's work – and Sarkofág pro královnu can be purchased.

Zdeněk Lhotský (*1956 Praha)
Painter, sculptor, glass artist and specialist, founding member of the group Tvrdohlaví. Since 1994 he has been the owner and artistic director of the studio for the production of sculptures from molded glass Lhotský s.r.o… He lives and works in Pelechov near Železný Brod.