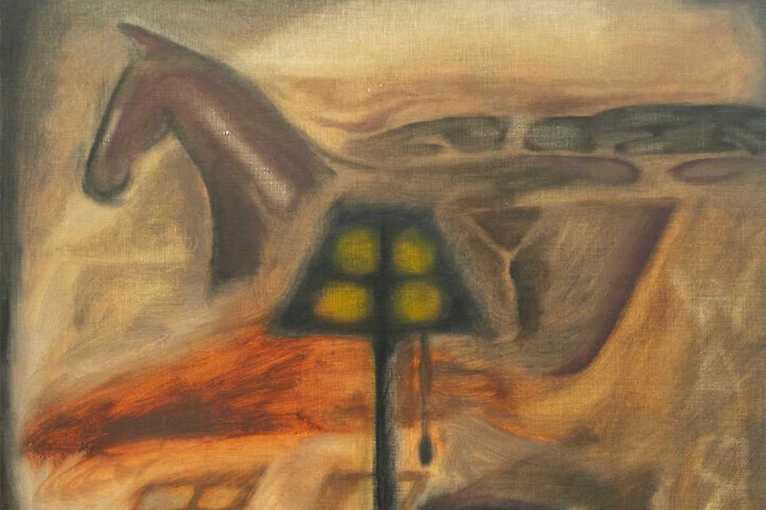 Zuzanna Bartoszek: Walk with a Knife

Solo exhibition by Zuzanna Bartoszek. “Walk with a Knife” is the title of an oil painting, one of many shown at the exhibition. The opening of the exhibition will take place as part of this year’s Warsaw Gallery Weekend.

"When I was a few years old and I was returning home with my mother, we were passed by a long-bearded man whose gait was full of weakness, even for his age. In the 1990s, there were many drunks, homeless people and other derelicts in the district of Jeżyce, so the sight of him was not particularly unusual. However, when we arrived alongside the man, we noticed that a long knife was sticking out of his belly and the blood around the wound had already soaked through the layers of clothes. Mom immediately called an ambulance, but the old man was insisting strongly that we shouldn’t. Eventually, he was taken to hospital against his will. But he gave the impression that if he had been left on his own, he could have walked off with that knife in his belly for quite a long way – to his house, maybe even to take a nap, have a bite to eat and read the newspaper.

Zuzanna Bartoszek is a Polish artist and poet. Her practice includes poetry, drawings and paintings. She took part in many exhibitions for example in MoMA Warsaw, Kevin Space in Vienna, Cell Project Space in London, Kunsthalle in Zurich. Her poems were published in magazines such as: Twórczość, Dwutygodnik, Lampa, Czas Kultury, Biuro Literackie, Fabularie. In 2016 Disastra Publishing published her debut poetry collection, Niebieski Dwór. Her second book of poems, entitled Klucz wisi na Słońcu/The Key Hangs from the Sun has been released in 2021 by WBPiCAK publishing house. She lives and works in Warsaw.