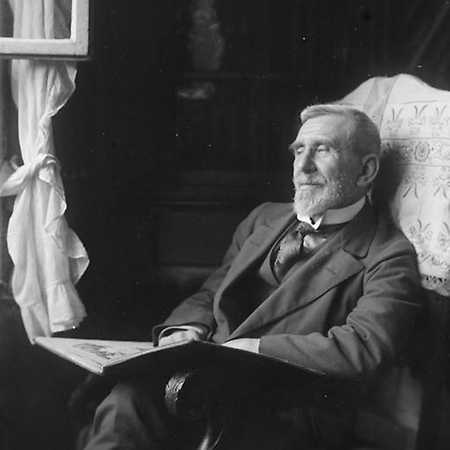 Friedrich Ohmann was one of the most important Central European architects of the time around 1900 and his numerous works are scattered on the axis between Split and Magdeburg. In the years 1899-1907 led the completion of the imperial residence in Vienna and since 1904 has been professor of architecture at the local Academy of Fine Arts. Although occupied a prominent social position, enjoyed the reputation of the artist. He was also one of four architects - the founding members of the Vienna Secession.

In 1888, Ohmann became the first professor of architecture at the School of Applied Arts in Prague, where he worked until 1898. He raised here many famous architects such as Frederick were Bendelmayer, Alois Dryák or Jiri Just, and in the Czech Republic also conducted a number of projects. His most important works include Prague Valterův palace interiors Theater in Karlin hotel Central and later Karel Kramar villa times. Ohmann designed Café Corso is considered the first Art Nouveau building in the Czech capital. Critic Charles B. Mádl Ohmann called the Baptist Prague Modern.

The concept of modernity, which Ohmann his work represents, not based on a revolutionary change for the utility values, ie the subordination of form to function. His modernity was evolutionary - Create a dialectical synthesis of the best ideas of the past with the present building types and structures. Its starting point was the study of baroque architecture. Barok as the embodiment of "openness" forms for Ohmann was a major impetus to develop personal creativity - offered him a middle ground between absolute freedom of artistic imagination and rationality rules and laws, as required historicism 19th century. In addition, Ohmann the works of Baroque architects, especially Dientzenhofers, taught design with respect to the spatial relationships, the genius loci. Baroque him and served as a means of expressing local and regional identity.