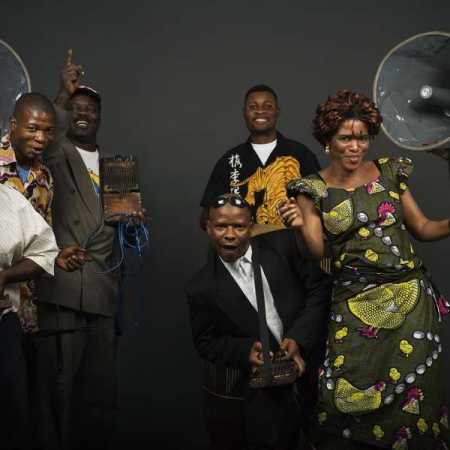 The trance rituals directly into electronic dance non-stop experiments. Music from the war zone of southern Congo, transferred to the periphery of the capital Kinshasa, with drnkacími cabinets, megaphones, percussion from car wrecks and home-made ​​microphones. The African DIY discovery becomes immediately hit the alternative scene around the world, is successful not only on the stages of world music but also on electronic, experimental and jazz festivals. He played with the Dutch tour-noise post-punk band The Ex and London’s Royal Festival Hall, Chicago invited him “post rock” group Tortoise.

In 2011 won Konon Well. An American Grammy for collaboration with Herbie Hancock. With its hypnotic music played a major European tour and performed at festivals Gilles Peterson Worldwide Field Day & Big Chill in the UK or Polish OFF. The band also completed a tour of Australia and finally visited 10 countries with a fantastic project vs. Congotronics. Rockers, in which the stars have joined Congolese scenes with young European and American indie musicians such as Deerhof, Juana Molina, Kasai All Stars and more. – Translated by Automatic service