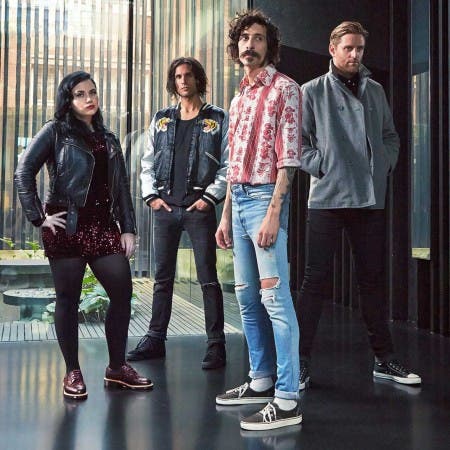 Turbowolf  Rose For The Crows

The media is not yet in vain trying to classify their music somewhere and mark, primarily because the group draws from many different sources. Their sound includes elements of rock and roll, psychedelic &, heavy metal, punk rock and electronics.

Before the release of its debut Turbowolf spent several years developing his musical style on several British tour alongside bands such as The Eighties Matchbox B-Line Disaster, The Computers, Pulled Apart by Horses and Dinosaur pile-up. In 2010, drove European tour with bands Korn and Dimmu Borgir. There are also many guests Turbowolf important festivals, such as. Download, Sonisphere or Great Escape.

In April 2014 Turbowolf announced a new single Solid Gold, which was available as a download on the website of the magazine Kerrang!, including the music video for the song. In October, the band announced the release date of his second album, "Two Hands" (April 6, 2015). – Translated by Automatic service