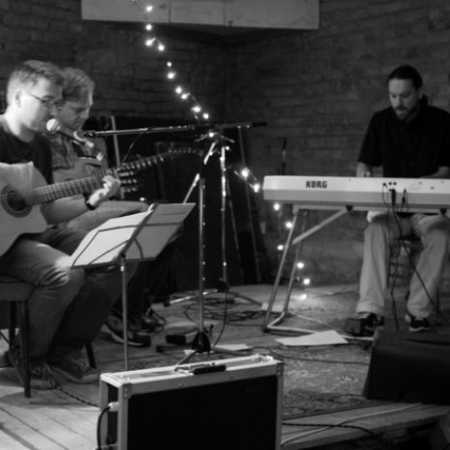 Zwei Kessel Buntes, which is somewhere between folk and jazz, "Viktor met with Mark in 2004 somewhere in Moravia, where it was hilarious, the jury children's singing competition. Then for a couple of years they built up a plastic body Lajka flies that running around the country for about two and a half years (as part of the two of us and Luke Vopravil, Tibor Strašrybka and Andrew Chalupský). Upon termination of their paths diverged, so that in 2011 brought together in this intimate way. Viktor composes music, plays the piano, can do quite well on the guitar during a concert fortunately rather silent. Marek composed texts, plays incredibly bad guitar, sings during a concert unfortunately speaks … " – Translated by Automatic service