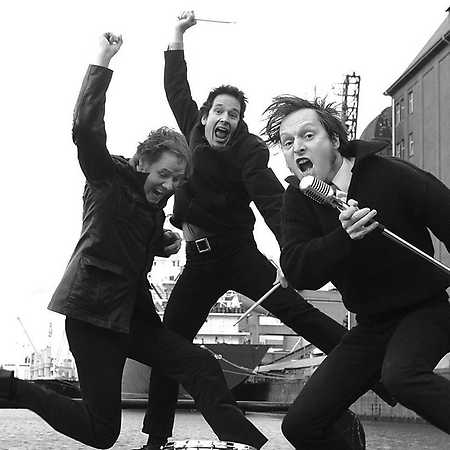 It has been already some time ago that the Cool Jerks started their 'campaign for the rescue of beat music', beginning in their hometown Bremen.

The beat rockers from Osterdeich have been able to please the whole republic of Germany with their down-to-earth, humorous beat music. They have already shared the stage with popular retro-60s-groups such as Solarflares, Lyres, the Montesas, Green Hornet, the Firebirds or the Boonaraaas.

Even the Netherlands couldn't escape the charm of the four-piece group. With them, the Jerks had always had a very special relationship, as they found real friends there, supporting them from the beginning of their career.

After eight years and four long players as well as diverse single releases (all released on their favorite label Soundflat), the band said: so far so good, shaked hands with all those, who had supported the band in any way in their thoughts and mothballed the instruments.

Though, for the filming of Banklady they took out their 60s shirts and ties again, got the old equipment out of the cellar and brought an energy to the stage as they would never have stopped. Because: You don't forget how to beat. And so the fans will have the possibility to experience one of their exciting concerts for a while more.