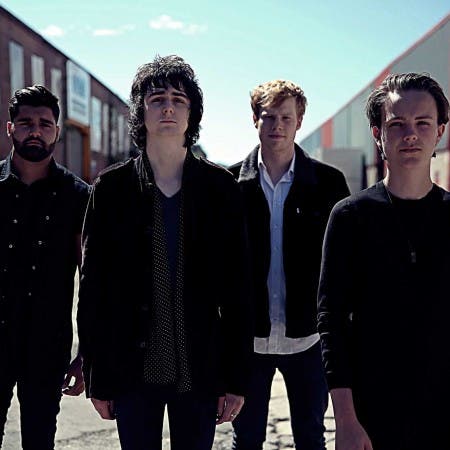 Himalayas  Sigh on a Hurricane

Himalayas are an indie rock band from Cardiff comprising Joe Williams (rhythm guitar and vocals), Mike Griffiths (lead guitar and vocals), Louis Heaps (Bass) and James Goulbourn (drums). The band started in mid 2015 and in December 2015, having cemented their reputation on the South Wales Music scene embarked on a six-date UK tour comprising Cardiff, Bristol, London, Brighton, Manchester and Liverpool. Sonically the band offers seductive guitar lines and hip bass parts that groove to the core, all driven by an avalanche of drums. The songs are fresh with a dark undercurrent and the overall sound is slick and melodic with lyrics that defy the age of the songwriters. Performance wise, Himalayas put on an energetic, jaw-dropping show. Their rapport and banter with their audience will make you feel like you’ve known them for years and you are guaranteed to go away huming their tunes and wanting more. Himalayas debut EP - Ecstasy was released by Peepshow Records in August 2016 and received a positive reaction from fans and critics. After the release of Ecstasy, Himalayas embarked on a heavy live schedule for the rest of 2016. Over the last few months, the band have been busy recording new material.

Horses On The Wall