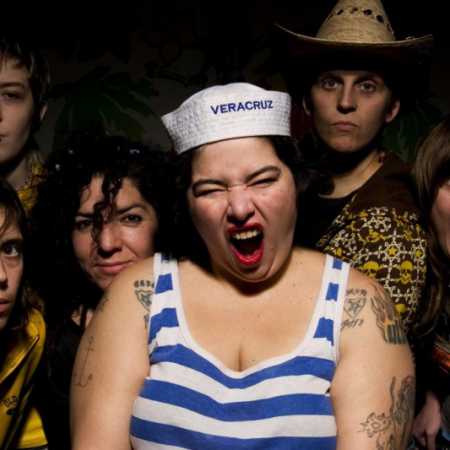 Six punk anarchistek from Argentina called Kumbia Queers playing cumbia far beyond your imagination. “I have no idea what it was for the day, but I know that it was unbearably hot, drank beer, I was depressed and wanted me to dance cumbia, music I hated,” she recalled the day of the big bang Mexican singer baroque shapes Ali Gua Gua with popularity in sailor hats. Rough female fronted punk band Las Ultrasónicas arrived in 2006 in Buenos Aires at the festival organized rebel women Belladona She Devils band and its members persuaded to move to cumbia position. About one of the most popular Latin American styles had no idea, but given the desire to provoke fun playing songs from Madonna, Ramones, The Cure or Black Sabbath in cumbia rhythm and Iron Man ponder over whether metalistka can walk with a girl crazy cumbia. Play with gender codes, but the importance of queer at them not so much apply to sexuality, which is not actually mention, says the supposedly alternative possibility to enjoy freedom in a way that society considers abnormal. In addition, the position of outsiders: women’s group on the predominantly macho music scene, initially sincerely hates anything associated with cumbia Viller – Argentine version of the style emerged from the slums of Buenos Aires and glorify drugs, violence and misogyny. – Translated by Automatic service