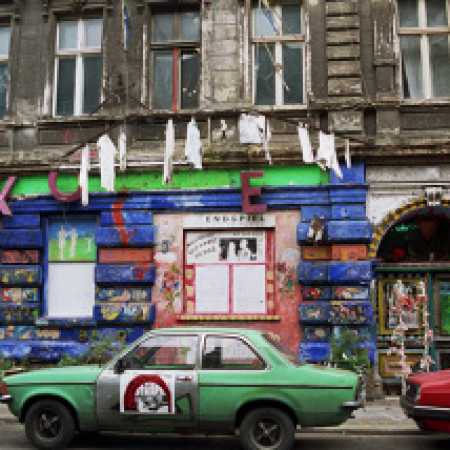 Kunsthaus KuLe is a nonprofit cultural organisation located in a five-storey altbau building on Auguststraße in Mitte-Berlin. The house was originally squatted by a group of art students from the former ‘West Berlin’, shortly after the fall of the Berlin Wall. Founded as a community of creative practitioners and as a living project, the house is called KuLe (short for Kunst und Leben / Art and Life).

To support its renovation (1994-98), the house-project received funding from the Berlin Senat to create four floors of dedicated living space (one of which consists of the communal kitchen, dining and lounge), an exhibition space, a theatre and a façade gallery.

Cultural exchange has been always part of the everyday life. KuLe was since 1990 a home for around 500 people as residents or guests from all over the world.

In 2016 a comprehensive book has been published about the history of this unique place in the context of the alternative urban development in Berlin-Mitte.

The rooms in the ground floor have been used for different noncommercial artistic activities since 1990. They are multifunctional and flexible, for public presentations as well as for internal use. Both rooms have been used alternately as a club, theater, concert hall, salon, convention room or exhibition space throughout the last 20 years. Since the renovation in 2015, exhibition projects are realized on a regular base.

Certain events are funded by cultural support programs. There are many collaborations with other project spaces and institutions that work in the intercultural sector. In 2016, Kunsthaus KuLe was honored with the price for artistic project spaces by the senate of Berlin.