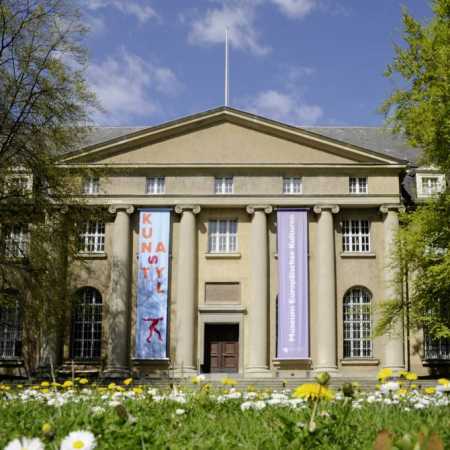 The Museum of European Cultures (German: Museum Europäischer Kulturen) is located at the Bruno-Paul-Bau, the oldest building in the museum quarter at Berlin-Dahlem, since 2011.

With more than 280.000 exhibits it is one of the biggest institutions of its kind. It is part of the National Museums in Berlin of the Prussian Cultural Heritage Foundation and developed out of the unification of the Europe-Department in the Berlin Museum of Ethnography and the Berlin Museum for Folklore in 1999.

the museum collects, researches, preserves, presents and explains daily culture and cultural environments in Europe from the 18th century until today. It aims to overcome national and linguistic borders and create a meeting point for humans with different cultural backgrounds as well as draw contexts between the historical collection and current issues.

In the permanent exhibition „Kulturkontakte. Leben in Europa“, that shows a cross section of the broad collections, in a public study collection and in rotating special exhibitions European cultures are introduced to the visitors.

Besides, the museum offers a wide event program with events like the European Culture Days, at which in cultural aspects such as art and crafts, music or culinary from different Regions in Europe are shown in collaboration with institutions, embassies and associations.

The museum also engages itself in international cultural projects and museum networks and works together closely with interest groups and visitors.