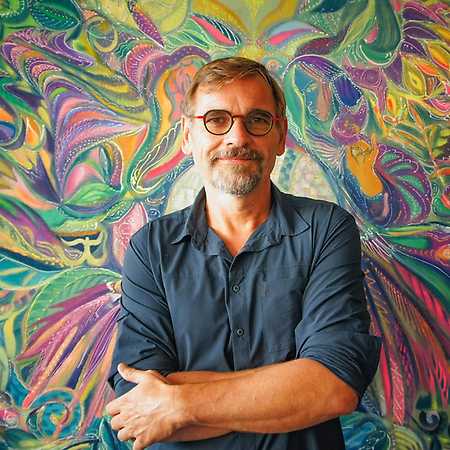 Otto Placht a Czech painter and unconventional artist. Since 1993, famous mainly for his large paintings inspired by his many years of residence in the South American jungle near the Peruvian indigenous inhabitants of the Indian tribe Šipibó. His art work is strongly influenced by the artwork of indigenous jungle (especially for the average Czech man) very exotic environment of the Amazon rainforest.

From 1982 to 1988 he studied at the Academy of Fine Arts, then he worked as an assistant in the studio of monumental art (1990-1993). Since 1993, alternately residing in Peru, where he was a visiting professor at the Escuela de Pintura Amazonica in Pucallpa. He has lectured at Florida International University and Espaęola Way Arts Center in Miami. Solo exhibitions since 1984. In 1993 he had an exhibition in the U.S. Miami, during which he met with Peruvian shaman Pablo Amaringem that in the same courtroom exhibited pictures of your vision. That same year, followed Placht traveled to Pucallpa, a city on the edge of the Amazon rainforest. Since then, there still circulate. "I lived two years in an Indian village of San Francisco, which is not far from Pucallpa and urban culture products already in it were available. During that time I was three and four months deep in the jungle in places where it is still really full strength, "Otto tells sails. San Francisco married a girl from a local tribe Šipibó and today with her three children. Lives alternately in Prague and in Peru, where he teaches at the University pucallpské Amazon. Otto sail is sometimes called the painter of the jungle. A label is entirely justified. Environmental influences and creative expressions of local Indians morphed into a completely original approach to art creation, built to the barbaric use of vibrant colors and the complex composition of the canvas, which often recalls the world of unbridled jungle. – Translated by Automatic service