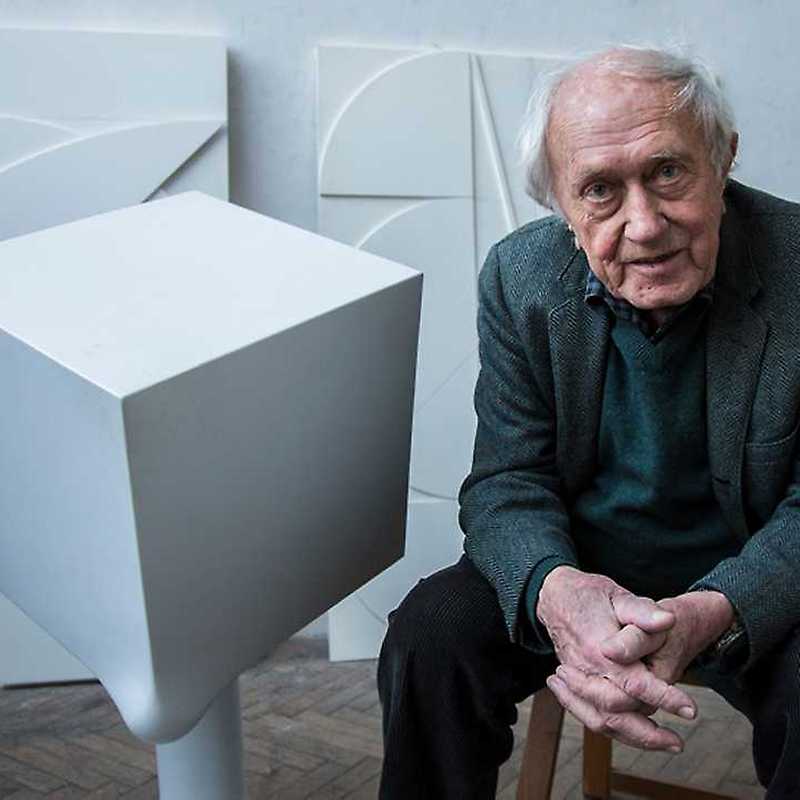 Stanislav Kolíbal was born in Orlová, in the Těšín region of Moravian Silesia. As early as his years at secondary school, he showed a wide-ranging interest in art. This led to courses in graphic art at the Academy of Arts, Architecture, and Design, Prague, from 1945 to 1950, and stage design at the Drama School of the Academy of Performing Arts, from 1951 to 1954. Since the 1950s, he has systematically devoted himself to sculpture.

The turning-point in Kolíbal’s thinking about art came in the late 1950s and early 1960s. Since then, he has, in an utterly original way, linked together formal aspects and the semantic concept of his works. To this end, he has employed the language of geometry and abstraction, gradually touching upon the then contemporary topics of minimalism, installation, conceptualism, Arte Povera, construction, deconstruction, and Neomodernism. At first he was interested in the theme of instability and the principles of time, duration, and decay. Afterwards he became fascinated by questions related to the illusory nature of fiction. A change in Kolíbal’s work came during a year’s stay in West Berlin on a prestigious DAAD grant, in 1988/89. He became more clearly attached to the language of geometry, which to him, however, is a means to express agreement and harmony.

Since the second half of the 1960s, Kolíbal’s work has been included in international shows of world art, including exhibitions at the Guggenheim Museum, New York (1967), Tokyo (1970), and, recently, the Museum of Modern Art, New York (2006). In his native country he has had solo exhibitions since the second half of the 1960s and in western Europe since the 1970s. Kolíbal first exhibited in New York City in 1975, and then had four exhibitions there at OK Harris. From 1990 to 1993 he taught at the Academy of Fine Art, Prague, where he was in charge of the Sculpture and Installation Studio.

Painstakingly thought out and always responding superbly to the space, every Kolíbal exhibition is a unique experience. That is certainly also true of ‘Another World’, the current exhibition at the Riding School of Prague Castle, which is, in its own way, the culmination of a life’s work.