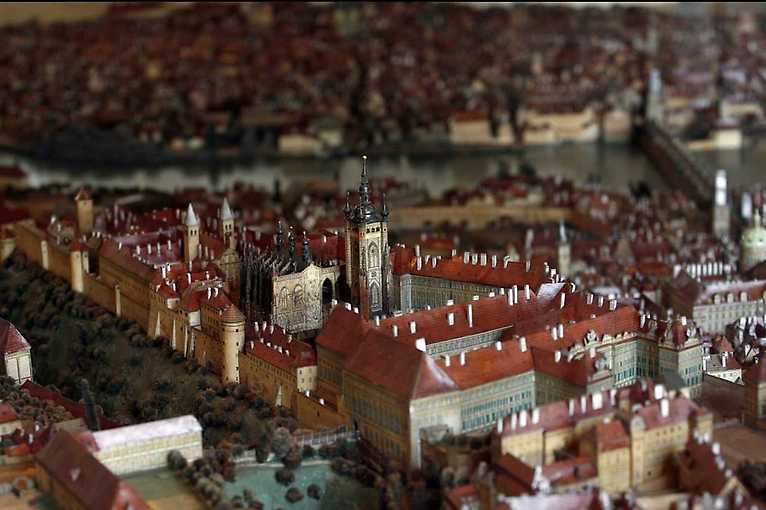 The Langweil model of Prague

The Langweil model, created in 1826–1834, is a unique exhibit and the most attractive one in the museum.Once it had been cleaned and new lighting had been added it was reopened to the public on 12th April 2007.

It provides unique evidence of how the Old Town, Malá Strana and Prague Castle looked before the redevelopment of Prague at the end of the 19th and start of the 20th centuries. It was made by hand using cardboard. On an area of approximately 20 m² the historical heart of Prague is depicted in detail as it looked one hundred and fifty years ago, including hundreds of buildings in the former Jewish Town and the Old Town which were later demolished. The coloured model contains more than 2000 buildings at a scale of 1:480, with all the details of how facades were decorated and items in courtyards, gardens and buildings inside residential premises and on adjacent land. For many demolished historical buildings the Langweil model provides the only proof of how they looked.

The model was created by an employee in Prague’s University Library, Antonín Langweil (1791–1837), who devoted all his free time and money to his unusual hobby. Although the model was already admired in his time by many educated people, Langweil never found a sponsor for his work. He died in poverty and his large family was left with nothing but debts and an unfinished work, whose price at that time seemed very problematic. In 1840 the model became part of the property of the National Museum in Prague and more than a hundred years later it was handed over to the City of Prague Museum where it is the most popular part of the historical exhibition. Only now can we appreciate the true importance of the Langweil model, its importance as a first-class document and as a remarkable work of art.