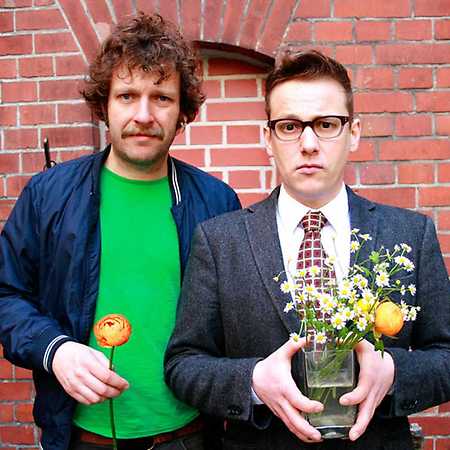 Tiere Streicheln Menschen are Martin ‘Gotti’ Gottschild and Sven van Thom. Gotti reads stories about people who really exist and also those who do not exist. Sven van Thom sings songs between melancholy and absurdity, between humor and malice. Tiere Streicheln Menschen is an action reading that does not give you poisonous looks just because the leather jacket crunches. One reads, one sings and the audience laughs.

Martin ‘Gotti’ Gottschild has been on the reading stages of the country for years. His specialty are also stunningly funny slide shows (absurd stories that he makes up according to nostalgic family slides, which he finds at flea markets). His books Der Schatz im Silberblick (2010) and The Schwarte Mamba (2011) were published by the publishing house Loob Verlag.

Sven Van Thom provides amusing entertainment with wonderful songs that make you move between melancholy and crazy humor. Following the success of his debut album Phanthomschmerz, he presents songs from his new album _Ach! _.