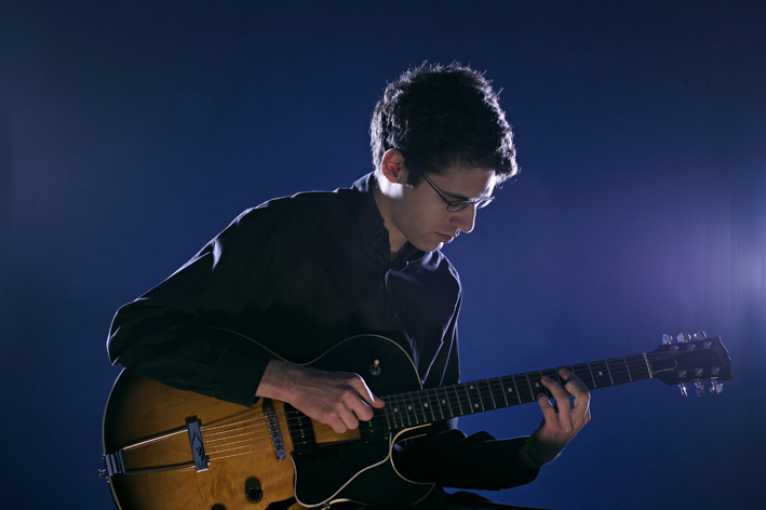 During the time of the pandemic in 2021 three old friends formed a new band with the idea of exploring new sonic possibilities and illuminating rhythm and harmony in a different way. Although David Dorůžka, Piotr Wyleżol and Jeff Ballard have known each other for years, they met in this particular setting for the first time in the spring of 2021 to record new music written by all three of them. The sound of the band relies heavily on analog electronic instruments, simple melodies and intricate grooves and the focus of the musicians is on fusing old and new sounds and approaches into a unique synthesis that characterizes the world of today. Together they set forth to explore uncharted territories, eagerly searching for the key to Antromeda's Mystery.

Their new album Antromeda's Mystery is coming out in June, 2022 (Bivak Records).

Often lauded as one of the leading figures of the Czech jazz scene, David Dorůžka has been active as a professional musician from the age of 14, having played concerts all over the world, collaborated with many of today’s leading musicians, and having spent extensive periods in the cities of New York and Paris. In the past seasons Dorůžka has been busy performing in France, Germany, Belgium, Denmark, Poland, Switzerland and other countries.

He studied composition and improvisation at the Berklee College of Music in Boston under Joe Lovano, Mick Goodrick and George Garzone, and also had an opportunity to learn from musicians such as Herbie Hancock, Brian Blade, Joshua Redman, and Christian McBride. Dorůžka has received three Czech Anděl Awards for Jazz Albums of the Year for his own records (Hidden Paths, 2004; Silently Dawning, 2008; Autumn Tales, 2016); he obtained the same award in 2012 for the album Light Year in collaboration with the quintet Inner Spaces. Dorůžka has performed at numerous prestigious festivals and clubs all over the world and has participated in countless recordings

As a child, he was already winning awards at national piano competitions in Poland and playing concerts with a classical repertoire. At 10 and 11 years old, he performed Mozart and Beethoven piano concertos with the Philharmonic Orchestra of Rybnik, Poland. As a student, he was also a laureate of numerous jazz competitions and festivals: Jazz Juniors in Krakow (1st prize), the Jazz Standards Festival in Siedlce (1st prize), the Pomeranian Jazz Autumn's “Key to a Career” and Jazz on the Oder in Wrocław (individual award for best instrumentalist), and the International Jazz Improvisation Competition in Katowice.

Piotr Wyleżoł has led his own Trio since beginning his activity as an artist. In 2001 his first CD as a leader was released, titled “Yearning” and recorded with Adam Kowalewski on bass, and Łukasz Żyta on drums. In 2006 his second CD, “Piano Trio” (with Michał Barański on bass and Łukasz Żyta on drums) was released, and in 2009 the renowned label Fresh Sound Records released his third and latest project, “Children's Episodes”.

Born in 1963 in Santa Cruz, CA, Jeff Ballard’s musical inspiration and drive was sparked by listening to musical legends ranging from Count Basie, Ella Fitzgerald, and Antonio Carlos Jobim, to The Beatles, Led Zeppelin and Jimi Hendrix. His exposure to multiple genres of music and the types of playing required for each enabled him to develop his foundation and understanding of music and planted the seeds from which his own varied approach to playing grew. At the age of 25, Ballard began an educational journey no college could match. He went on the road for eight months annually from 1988 to 1990 with Ray Charles, backing one of music’s biggest stars, perfecting his time feels and tempos from playing with Charles nightly on the bandstand for three years.

In 1990 Ballard moved to New York and jumped into the transformative scene that was developing there at the time. He began collaborating with Kurt Rosenwinkel, Brad Mehldau, Mark Turner, Joshua Redman, and Ben Allison, among others who were mixing jazz tradition with their own influences, ranging from Middle Eastern rhythms to electronica and modern hip hop. Ballard’s past and present recording sessions and touring associates read like a who’s who of jazz. To name a select few: Chick Corea, Pat Metheny, Joshua Redman, Kurt Rosenwinkel, and Brad Mehldau. His present work continues with the Brad Mehldau Trio, as co-leader of collective group FLY (featuring Mark Turner, Ballard, and Larry Grenadier) and with his own groups The Jeff Ballard Trio and Jeff Ballard Fairgrounds. In 2014 The Jeff Ballard Trio with Lionel Loueke and Miguel Zenon released their debut album, Time's Tales, on Sony/OKeh Records. On January 25th, 2019 the group, Jeff Ballard Fairgrounds, released their debut album entitled Fairgrounds on Edition Records.

Admission seating CZK 600, standing CZK 300. There is no need to reserve a seat when purchasing a seating ticket.

7:24 294 ×
David Dorůžka Quartet & Josefine Lindstrand  Just One Of Those Things