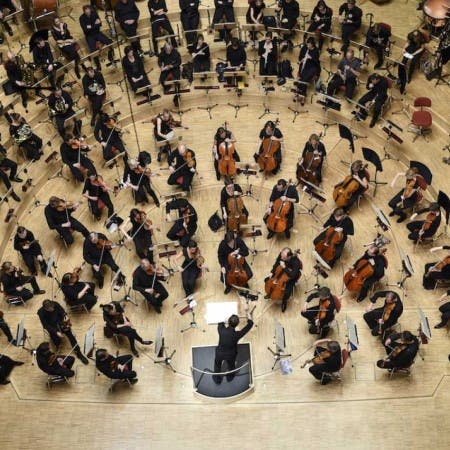 The Essen Philharmonic is one of the oldest orchestras in Germany. Founded in 1899, it soon acquired its own concert hall, upon whose festive opening in 1904 it performed Richard Strauss’s Sinfonia domestica under the baton of the composer. Two years later it gave the premiere of Gustav Mahler’s Sixth Symphony, again under the composer’s own direction. Since its origin more than a century ago the ensemble has earned an outstanding reputation: music critics have repeatedly deemed it the ‘orchestra of the year’ in Germany, and numerous superb conductors have lifted their batons to lead it, from Otto Klemperer through Bernard Haitink to Krzysztof Penderecki. As is customary in German-speaking countries, the ensemble serves as both a symphonic and an operatic orchestra, performing in Essen’s Aalto-Musiktheater. Apart from normal operatic performances, each season it gives about thirty orchestral concerts, and some of its members also play in chamber groups. The orchestra also appears regularly in concert halls abroad, and engages in music education projects for youth.